Difference between Reuse and Recycle

Key Difference: The concept of reuse is when a product that is newly purchased is put to another use after the first use is completed. Recycling is processing of used materials (waste) into new products to prevent waste of potentially useful materials.

The three golden words in order to save our planet: reduce, reuse and recycle. These three words have been drilled into our heads time and time again. With global warming and the sudden shifts in temperature, people have started paying attention to these three words in order to postpone the impending doom. Though we have often heard these words, the meaning of these words often tends to blur and become confusing. 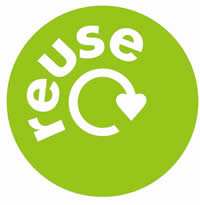 Reduce, reuse and recycle are a part of the waste hierarchy, which is a classification of waste management options in order of their environmental impact. The hierarchy also includes a fourth step, known as recovery. The steps in the hierarchy vary depending on country. Reduce is the concept of waste minimization that suggests the best way to conserve is to use less. This more commonly implies to energy, and resources. Recovery includes any technique or method of minimizing the input of energy to an overall system by the exchange of energy from one sub-system of the overall system with another. An example of this would be using less electricity and shifting to solar energy.

Though reduce and recovery steps play an important part in environmental protection, they become expensive as they require alternate environmental friendly resources that are not cheap. The ones that offer the best benefit at almost no cost to consumers is the reuse and recycle.

The concept of reuse is when a product that is newly purchased is put to another use after the first use is completed. In layman terms an item is reused for the same purpose or another purpose. Reuse is considered to have a massive impact on environment as an item which would have been thrown out, is being given a new purpose. It also eliminates the need to buy another new product, contributing to reduce. The concept of reuse includes anything object that can be used again maybe for a short term as well as long term. An example of reusing would be carrying a cloth bag while going shopping. Since the cloth bag can be used more than once, a person would not have to keep purchasing new paper or plastic bags, hence reducing amount of waste.

Reusing can also include using older materials for decorating or other purposes. Plastic bottles can be reused in order to cut the top of and create pen holders. Milk crates can be made into storage compartments. Even donating is a form of re-use, where another person can make use of items that are no longer of use to the person donating them. Salvation Army, churches and various other places hold donation centers where people donate old clothes, shoes, toys, etc that are in turn given to less fortunate people.

Recycle is another concept that can be widely used to protect the environment. Recycling is processing of used materials (waste) into new products to prevent waste of potentially useful materials. The waste is converted into raw materials for a new product. Recycling helps reduce the consumption of fresh raw materials, energy usage, air pollution (from incineration) and water pollution (from landfilling) by reducing the need for "conventional" waste disposal, and lower greenhouse gas emissions as compared to virgin production.

Material such as glass, metal, plastic, paper and cloth can be reprocessed and used to create brand new products. Plastic bottles are melted to create new plastic bottles. Even electronics, such as computers, cell phones, TVs, etc can be taken apart and the components can be upgraded and used for new electronics. A set back of recycling is that it has to be sorted and cleaned before it can be processed into new material. This can add extra costs on the part of the company. However, many companies are still turning to the concept of recycling as in the long run it is cheaper compared to purchasing new raw materials every time. In order to make it easier for recycling, people are usually asked separate plastic, glass and paper from other waste.