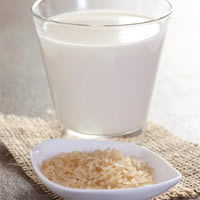 Both rice milk and soymilk are alternatives to cow milk and other dairy products. Rice milk is made out of rice, whereas soy milk is made from soybeans. They are both great alternatives to regular milk, especially for people who are either lactose intolerant or follow a vegan diet. However, there are some differences between them in respect to nutritional value.

Rice milk is processed from rice, usually brown rice. It commonly sold unsweetened, but it sometimes may be sweetened with sugarcane syrup or other sugars. However, rice milk normally tastes sweeter than cow's milk. Some manufacturers may use vanilla to give the rice milk a more similar taste to cow milk. Commercial brands of rice milk are available in vanilla, chocolate, and almond flavors, in addition to the original unflavored variety.

In order to make rice milk, the rice is processed via special pressing process in which the rice goes through a mill stream. The rice is soaked with water, grinded to a paste then filtered and strained. The liquid obtained out of the pressed grains is the rice milk.

Rice milk contains more carbohydrates as compared to cow's milk and has no cholesterol or lactose. However, it does not contain significant amounts of calcium or protein. To make rice milk more nutritional, commercial brands are often fortified with vitamins and minerals, including calcium, vitamin A, vitamin B12, vitamin B3, vitamin D, iron, and niacin. Due to this, a serving of fortified rice milk provides the amount of calcium as a serving of cow's milk. Also, as rice milk has very little natural fat, it is often thickened with tapioca or carrageenan. 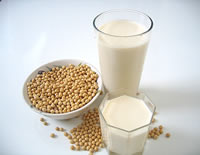 Soy milk, on the other hand, is a milk alternative made from soybeans. It is also called soya milk, soymilk, soybean milk, soy bean juice, soy drink, or soy beverage. It is a traditional and common staple in Asian cuisine. Typically, it has a thicker consistency than rice but lacks the rice milk’s sweet flavor.

Soy milk is made by soaking the soybeans in water, then grounding the mixture to a fine paste. The paste is then strained and the resulting liquid is called soy milk.

Soy milk has similar content of protein and fat as regular cow milk but less saturated fat and a different amino acid profile. Soy milk normally has less fat than whole milk. It also has no cholesterol. Soy milk contains sucrose which breaks down into glucose and fructose. The only downside is that natural soy milk contains little or no calcium, however many manufacturers fortify their soy milk with calcium, minerals and vitamins, including vitamin D. Soy milk also naturally has high quality proteins, B-vitamins, and isoflavones.