Difference between Sound and Light

Key Difference: Sound is a mechanical vibration that passes through a medium such as gas, liquid or solid to become a sound. Sound is made up of frequencies, some of which we can hear while others we can’t. Sound is technically defined as a mechanical disturbance traveling through an elastic medium. Light is an electromagnetic radiation that is visible to the human eye. Light is visible when it reflects off a surface and is also measured in wavelengths. Visible light (light that is visible to humans) has a wavelength in between 380 nanometers to 740 nanometers. Similar to all electromagnetic radiation (EMR), light is emitted and absorbed in tiny ‘packets’ known as ‘photons’ and exhibits the wave-particle duality. 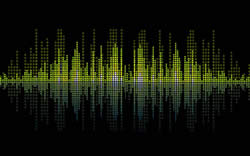 Sight and sound are two of the most used senses and play a vital role in human lives. The colors that one sees, the beautiful blues and the pretty purples are nothing but how the light reflects of objects which we see. Sounds on the other hand are vibrations rather than reflections; it is how the sound wave bounces of something to reach our ears. Notice, how deaf people can feel the music by feeling the vibrations on the speaker? Well, that’s how it works. Sound and light are both waves but they differ from each other in nature.

Sound is a mechanical vibration that passes through a medium such as gas, liquid or solid to become a sound. Sound is made up of frequencies, some of which we can hear while others we can’t. Sound is technically defined as a mechanical disturbance traveling through an elastic medium. The medium is not limited to air but can also include wood, metal, stone, glass and water. Sound travels in waves: mainly longitudinal and transverse waves. Longitudinal waves are waves whose direction of vibration is the same as their direction of travel. In layman’s terms the direction of the medium is the same or the opposite direction to the motion of the wave. Transverse wave is a moving wave that consist of oscillations perpendicular to the direction of the energy transfer; for example if a wave is moving in a vertical fashion, the energy transfer is moving in an horizontal fashion.

The properties of sound include: Frequency, Wavelength, Wavenumber, Amplitude, Sound pressure, Sound intensity, Speed of sound and Direction. The speed of sound is an important property that determines the speed at which sound travels. The speed of sound differs depending on the medium through which it travels. The greater the elasticity and the lower the density, the faster a sound travels. Because of this sound travels faster in solids compared to liquids and faster in liquids compared to gas. According to How Stuff Works, “At 32 °F. (0 °C.), the speed of sound in air is 1,087 feet per second (331 m/s); at 68 °F. (20 °C.), it is 1,127 feet per second (343 m/s).” The wavelength of a sound is the distance the disturbance travels in one cycle and is related to the sound’s speed and frequency. High frequency sounds have shorter wavelengths and low frequency sounds having longer wavelengths.

Light is an electromagnetic radiation that is visible to the human eye. Light is visible when it reflects off a surface and is also measured in wavelengths. Visible light (light that is visible to humans) has a wavelength in between 380 nanometers to 740 nanometers. Similar to all electromagnetic radiation (EMR), light is emitted and absorbed in tiny ‘packets’ known as ‘photons’ and exhibits the wave-particle duality. This property is when a particle exhibits the properties of both waves and particles. Light is a changing feature and still many of its properties are undiscovered or currently under observation. Light is believed to travel faster than anything in the universe; however, researchers have managed to slow down a beam of light to 38 kilometers an hours, approximately 18 million times slower than the original speed. 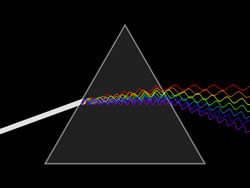 Properties of light include: intensity, propagation direction, frequency or wavelength spectrum, speed and polarization. The normal speed of light in a vacuum is 299,792,458 meters per second. The theory behind light has been constantly changing as new research is uncovered. Initially, Pythagoras proposed that light rays emerged from a person’s eye and struck an object.

Famous geometrical optics practitioner Ibn al-Haytham, claimed that vision was a result of light striking an object which would then be reflected on the person’s eye, resulting in vision. The two main properties of light reflection and refraction are used to describe mainly how light travels. A ray of light hits a shiny smooth surface and bounces off. The law of reflection states that the ray comes off the surface at an equal angle to the angle at which it struck the surface. The law of refraction suggests that when a ray of light passes from one transparent medium to another transparent one such as from air to water it changes speed and the way it bends. This is why diamonds are so sparkly, they cause the light to slow down when it passes through it. Refraction is also used when vision is corrected; by using a glass that is curved at a certain angle the vision of the person can be corrected by the way light is refracted in the eye. The speed of light at vacuum is measured at 186,000 miles per second (approx 300,000 kilometers per second). Because light is considered as a wave in most scenarios, it is also measured in frequencies with short wavelengths being high frequency and high energy and long wave lengths being low frequency and low energy.

Following the light being a wave theory was established. Other researchers including Max Planck and Albert Einstein started researching using light. Planck suggested that light carried energy, which was further advanced by Einstein in an experiment where he flashed a light against a metal surface and found that light would transfer their energy to electrons, which would move along the metal or get ejected from it. This resulted in light carrying photos and suggested that in certain scenarios light acted as a particle. Niels Bohr advanced this theory even further, stating that electrons shift from a higher orbital level to a lower one it gives off light in the manner of photos. This caused the light to be considered as having both properties of waves as well as particles.

Sound and light have many similar properties such as both are waves and both can reflect of a medium. However, they also contain many differences. Sound wave is a vibration or a disruption of the wave because of an object which causes it to make sound. However, sound also needs a medium to travel. At vacuum, there is no sound as there is no air hence sound would not travel. This is why there is no sound in space. Light has dual properties of wave as well as particle. Light does not require a specific medium to travel and hence light can be seen even in space. Light is also a form of energy, which is exhibited when an electron shifts from a higher orbital to a lower orbital. Light also travels faster compared to sound; this is why we can see the lightening first and hear the thunder follow later.