Key Difference: Mango refers to the fruit derived from a tropical evergreen tree (Mangifera indica).  There are numerous varieties of mangoes. However, some of the famous ones include varieties like Keitt, Alphanso, Kesar, Haden and Francis.

Mango is a delicious juicy tropical fruit belonging to Mangifera genus. The word has been derived from the Portuguese word manga. It is a favorite fruit of many as is admired for its unique great flavor and fragrance. In addition to its rich flavor, it is also considered to be a nutrition rich fruit. There are nearly more than thousand varieties of mango. Based on its cultivar type, the shape and size of mangoes vary from each other. Its flesh is orange yellow in color and is juicy. This fruit is native to Asia, especially eastern India and Burma. Later, it spread to other parts like Malaya, eastern Asia and eastern Africa.

Some of the superior quality varieties of mangoes are – 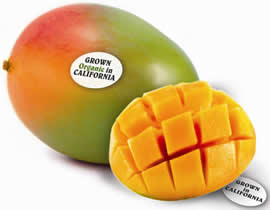 Keitt – These mangoes are firm and have a juicy flesh with lesser fibres. Its sweet and fruity flavor is admired by all. The skin or covering’s color ranges from dark to medium green. It is generally imported from Mexico and United States. It is harvested between June and September. It is disease resistant and therefore is considered for shipping at distant places. It also has red blushes over its skin. 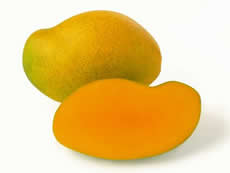 Francis – These mangoes from Haiti are known for their super smooth and tender flesh. It is sweet and spicy in flavor. It is kidney shaped large mango. Its covering is light green in color, however it changes into more yellowish on ripening. This mango has been traditionally used in desserts and therefore is also known as the Dessert Mango. It is harvested between September and October. 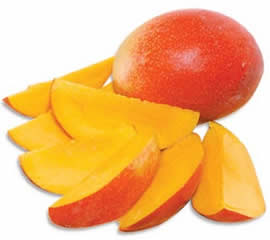 Haden – These mangoes are generally grown in hotter regions of the world like Mexico, the Ecuador and Peru. This variety originated in Florida. It has golden yellow covering or skin which has blush of crimson red color. It is ovate round in shape. Its firmness varies from medium to thick. It is highly popular for its rich and sweet flavor which tends to be little turpentine close to the skin. 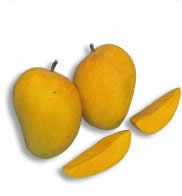 Alphanso – This Indian oblong shaped mango is considered to be the most superior in context to appearance and flavor. It is marked by a short season ranging between March to May. It has a mild flavor and its skin color varies from purple to yellow skin. It is mainly grown in Gujarat and Maharashtra of India, and it is quite expensive. It is not easy to grow Alphanso and therefore it becomes rarer type of variety. 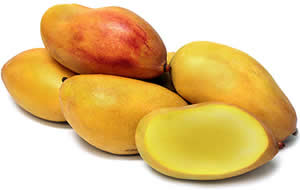 Valencia Pride – These large mangoes from South Florida are long in shape. They are fibreless. They are pink to red in color with yellow. It is sweet and tangy in flavor. Its season varies from July to August. The flesh of this mango has a very desirable strong odor. It is generally planted by using dooryard planting technique. 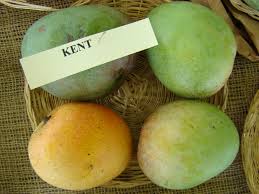 Kent – This variety of mango originated in Florida. These are apt mangoes for making juices and also for drying. They also have a sweet and rich flavor. Their tender flesh is equipped with limited fibres. Its skin is usually of dark green color with red spots. They are large and oval shaped. It is known for its long shelf life. 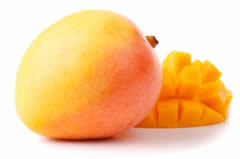 Kensington – This elongated ovoid shaped mango has a greenish yellow skin with a red portion zone. It has moderate amount of flesh and is not spoonable like Kent mangoes.  The size of mango is medium and the skin of this mango is thick. Its seedling originated from Queensland of Australia. This variety is also known as Bowen or Kensington Pride. 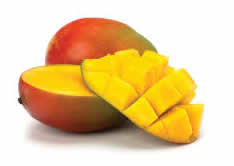 Tommy Atkins – It has originated in Florida. It is a well-known commercial variety of mango. Mangoes are medium to large in size and shape also varies from oval to oblong. They are orange or yellow in color and have a heavy red blush on them. They have a very broad rounded base. The skin of these mangoes is thick and strong in comparison to some other mangoes. The flavor of these mangoes is mild and sweet. They are also admired for their strong pleasant aroma. 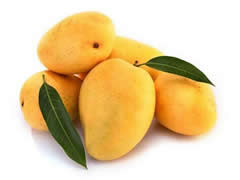 Kesar – This mango is generally grown in Gujarat of India. It is a medium sized oblong shaped mango. It is admired for its extreme sweetness. In appearance it is dull with some patches of yellow color. Inside it has a smooth textured flesh with a good fragrance. It is harvested around mid-June to July. 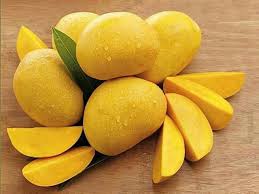 Chaunsa – This delicious mango comes from Multan districts of Punjab and Pakistan. These are known for their unique fragrance. The mangoes are pale yellowish in color. Inside, it has a very soft flesh with very little fibre. It is harvested in July to September.

Hi, I know this might sound a bit silly, but to be quite frank based off this article alone I am not convinced these are truly different types of mangoes. When I go to the store to purchase mangoes, I do not purchase a "Francis Mango" or any other kind of mango, it is simply a mango. As a result, I am starting to get convinced that different types of mangoes don't exist, and that these "Types" are fabricated to charge customers more money for more "exotic" types of mangoes. If possible, I would like to see some concrete proof, specifically a video that examines the "different" types of mangoes including cutting them open and tasting them. I would also like my name to be mentioned in the video so that I can confirm that the video was not faked. Please know that I do not have any malicious intent, I truly just want to confirm with my own eyes if different types of mangoes really exist or not. Sincerely, your lunar legend, Tsuki Hime