Difference between Bharat and Hindustan

Key difference: ‘Bharat’ and ‘Hindustan’ are names of one country, present day India. ‘Bharat’ is the official Sanskrit name of the country; while ‘Hindustan’ is the Hindi name for the country. Both these names were formed during their times and further got changed accordingly.

Bharat and Hindustan are names of India; which were named according to their times and eras. These are most renowned and observed names in some context, which means and points to the same concept, but still people find it confusing; hence the below article would clear their confusion.

As of earlier, present day India had a huge land-mass which comprised of the major parts of Asia. Present day India included the present Afghanistan, Pakistan, Bangladesh and Nepal. These were combined under one country, which was previously known as “Akhand Bharat” (whole India). Also, these countries were part of India before partitions and independence, after that these got separated and were known as independent individual country. The term ‘Bharat’ is the official name of present day India in Sanskrit language. This name was derived from name of King Bharat, who had won the whole land from present day Afghanistan to Burma.  At that time, the entire land was called as “Bharat-Varsha”. 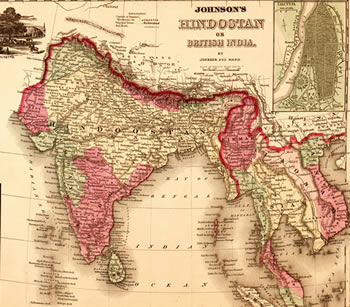 Modern day North India was called as ‘Hindustan’ in Arabic language. The name ‘Hindustan’ was derived from ‘Hind’ in Persian‎ is derived from the Iranian equivalent of ‘Sindh’. The word ‘stān’in Persian means ‘country’ or ‘land’ (cognate to Sanskrit sthāna "place, land").  The term ‘Hindustani’ in Hindi-Urdu language, resembles the name ‘Hindustan’ which was in use synonymously with India during the British Raj. In the 19th century, the term used in English, referred to the Northern Region of the subcontinent between Indus and Brahmaputra rivers, along with the Himalayas and Vindhyas in particular. Also, Hindustan- means land of Hindus which was used during the Mughal Empire in India.

The name ‘India’ is derived from the river name “Indus’. ‘Bharat’ and ‘Hindustan’ were names given to the country in their times. Both had their histories and meanings according to which these names were kept. The name ‘Bharat’ was the older name than ‘Hindustan’, while presently the country is known as ‘India’.

INDIA / HINDUSTAN is the historic name of a region including Pakistan, bharat and Bangladesh. only bharat is not India. Pakistan and Bangladesh is situated in INDIA, just like Dubai in middle east.