Difference between Brinjal and Eggplant

Key Difference: Brinjal and Eggplant are two different words that refer to the same fruit. Eggplant is also known as aubergine, brinjal eggplant, melongene and guinea squash. Eggplant/Brinjal is a member of the Solanales order and the Solanum genus. Brinjal is a less common term that is heard in countries such as India, while Eggplant is used in the US. 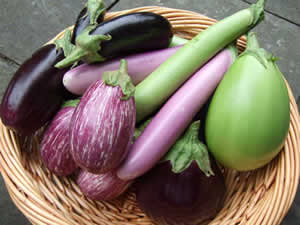 There are various different languages that exist around the world and globalization has brought the world closer together, this has resulted in multiple terms being used for one particular object. These terms may differ from each other slightly or be completely different from each other, but they mean the same thing. Even in the English language, the English spoken in the US and in the UK differs. An example of this is a closet or a cupboard. A closet is an American term, while a cupboard is a British term. However, both mean the same thing.

Similarly, Brinjal and Eggplant are two different words that refer to the same fruit, wrongfully classified as vegetable. Brinjal is a less common term that is heard in countries such as India, while Eggplant is used in the US. Eggplant is also known as aubergine, brinjal eggplant, melongene and guinea squash. An eggplant is a species of nightshade flowering plant that bears a fruit of the same name and is used in cooking.

Eggplant/Brinjal is a member of the Solanales order and the Solanum genus. It is considered to be related to both the tomato and the potato and is popularly cultivated in India. Eggplant is cultivated in temperature climates. It can grow from 40-150 cm tall with large coarse leaves. Wild variants can grow even larger and have thorny stems. The plant bears white to purple flowers and yellow stamens. The egg-shaped glossy black fruit has white flesh with a meaty texture. Because it resembles the color and shape of a egg, it popularly became known as an eggplant. However, one should note that eggplant has nothing else to do with eggs and is vegetarian.

The plant is native to the Indian Subcontinent and has been cultivated in southern and east Asia since ancient times. There are different varieties of the plant that produce different size, shape and color. Although, majority of the eggplants are purple, there are also eggplants that are green or white in color. The fruit is known for its bitter taste and it becomes tender when cooked. It is used in many recipes including Ratatouille, Baingan ka Bharta, musakka/moussaka, etc.

Brinjal is best cultivated in tropical to subtropical climates, making it ideal for growing in southeast and east Asia. Eggplant can be sown directly into the garden. However, it should not be planted near tomatoes and potatoes as the same pesticides that cause a problem for the other solanaceous plants like tomatoes can cause a problem for the eggplants. Four years should separate successive crops of eggplants. Good sanitation and crop rotation practices should be used for controlling fungal diseases.