Difference between Cheetah and Jaguar

Key Difference: Both Cheetah and Jaguar are essentially wild big cats. The main difference between both the animals is their black color in the body. Cheetahs are tan in color with black spots all over the bodies. On the other hand, Jaguars have larger rosette-shaped patterns along the side and back of the body. 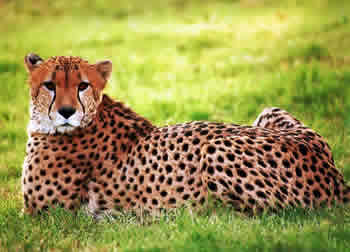 Cheetahs are the only big cat that cannot roar, and are the fastest animal in the world. Cheetahs can go from 0-60 miles per hour in three seconds. Cheetahs are tan in color with black spots all over their bodies. They can also be distinguished from other big cats by their smaller size, spotted coats, small heads, ears and distinctive "tear stripes" that stretch from the corner of the eye to the side of the nose. Cheetahs cannot climb trees and have poor night vision. The amazing fact is that they only need to drink once every three to four days.

They have a very flexible build, with long legs, body, and tail. They are more nervous, cautious, and always on the look out. Cheetah's, like most animals in a competitive surroundings, have other adaptations developed eventually to make their niche and ensure their survival. 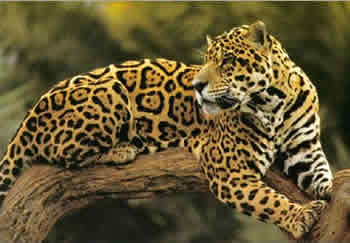 The jaguar is the third-largest living Feline species, after the tiger and lion, and is also the largest feline in the Americas. The jaguars are compact and well-muscled animals. They are large, muscular felines and have short strong legs. Jaguars hunt individually, often springing from trees upon tapirs, capybaras, and peccaries. They either crush or suffocate the prey or bite straight through their skull. They also feed on fish and rabbits; some jaguars kill domestic cattle for food. About 3 and half months after mating, the female generally gives birth to two to four kittens.

They are thick, powerful and stocky in build. They are carnivorous stalk-and-ambush predators. The spots on the coat are more solid and black on the head and neck and become larger rosette-shaped patterns along the side and back of the body.

Comparison between Cheetah and Jaguar: