Difference between Chlorine and Chloride

Key difference: Chlorine is a naturally occurring element with a symbol Cl and atomic number 17. Under standard conditions, the element is a yellow-green gas. Chloride is an ion of chlorine. Essentially, when atoms gain or lose electrons, they become ions. Chlorine atoms gain one electron to become a chloride ion (Cl−). An ion cannot remain in a free state, and has to combine with another element or elements to form a compound. 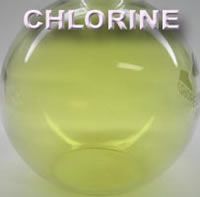 Chlorine is a naturally occurring element with a symbol Cl and atomic number 17. Under standard conditions, the element is a yellow-green gas. It has the highest electron affinity and the third highest electronegativity of all the elements. Hence, it is a strong oxidizing agent. Chlorine is found mainly in the earth’s crust. It makes up approximately 0.045% of the crust. However, chlorine is rarely found by itself and is usually a result of direct or indirect oxidation by oxygen.

Chlorine gas was first synthesized around 1630 but was not recognized as a fundamentally important substance. The characterization of the gas was made in 1774 by Carl Wilhelm Scheele who supposed it as an oxide of a new element. In 1810, Sir Humphry Davy and other chemists confirmed that the gas was a pure element. The name of the gas, ‘chlorine’ was derived from an Ancient Grrek word, ‘khlôros’ which means ‘pale green.’

The high oxidizing potential of elemental chlorine has lead to the chlorine’s uses for bleaching and disinfectant. Chlorine is also used as an essential reagent in the chemical industry.  Chlorine is also used in the manufacture of numerous consumer products, including production of plastics and other end products. As a disinfectant, chlorine is used to sanitize and disinfect water, especially in swimming pools. It also lowers the pH of water.

Chloride is an ion of chlorine. Essentially, when atoms gain or lose electrons, they become ions. Chlorine atoms gain one electron to become a chloride ion (Cl−). An ion cannot remain in a free state, and has to combine with another element or elements to form a compound. Even the chorine in the crust occurs as chloride in various ionic compounds, including table salt, i.e. sodium chloride (NaCl). These salts are often collectively called chlorides.

The chloride ion and its salts, such as sodium chloride, are very soluble in water. In fact, in sea water, the average concentration of chloride is 18.98%. It is the most abundant negative ion (anion) in the ocean. It constitutes nearly 90% of the anions found in sea water. 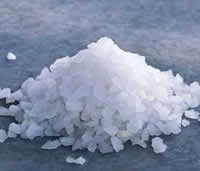 Chloride is essential. It is required for all known species of life. However, only naturally occurring chloride is useful in the body. Artificially produced chlorinated organics may be inert or even toxic to the body. Chloride is used in the body for many different ends. It is located in all body fluids and is responsible for maintaining acid/base balance, transmitting nerve impulses and regulating fluid in and out of cells. It is also a key element in metabolism, which is the process of turning food into energy. The amount of chloride in the blood is carefully controlled by the kidneys.

Other than in the body, chloride also has other uses. Chlorides, i.e. salts formed with the chloride ion, are used to preserve food. The most commonly used chloride for this purpose is sodium chloride. Other salts such as calcium chloride, magnesium chloride, potassium chloride have varied uses. This includes applications in medical treatments to cement formation.

Well I don't know about the rest of you reading this stuff but I'm fairly confused! Chlorine is an essential element in the human body, actually totaling .15% of our mass and yet I cannot figure out why this site as well as others skirt around the subject of elemental supplementation so purposely. It's fairly obvious that you need chlorine in your every day life, but not from tap water and or iodized salt for those of you doing you're serious health research! Check out sodium chlorite and the controversial subject of Jim Humbles accidental discovery of MMS. A combination solution of sodium chlorite and phosphoric acid resulting in chlorine dioxide that he accidentally discovered by using water purification drops to aid in his staffs total and controversial recovery from malaria poisoning. Best wishes and good luck understanding the truth..