Key Difference: Commercial banks cater to the general public and provide services such as accepting deposits, providing loans and other basic investment products. Investment banks are financial institutions that assist individuals, corporations, and governments in raising financial capital by underwriting or acting as the client's agent in the issuance of securities (or both). 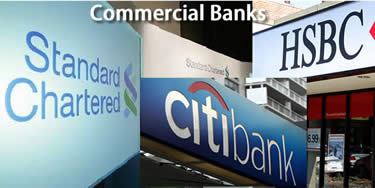 The functions of banks are often undermined by the general public. To the general public, banks are places where the salary is deposited and funds are withdrawn for usage. This is limited definition of the multibillion dollar banking sector. The banking sector is divided into two broad categories: Investment Banking and Retail/Commercial Banking. Both of these banks cater to different clientele and offer different services. 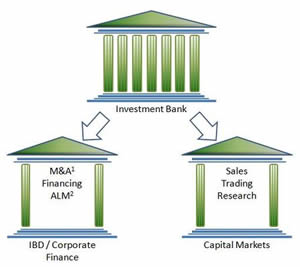 Investment banks are financial institutions that do not accept deposits, but rather assist  individuals, corporations, and governments in raising financial capital by underwriting or acting as the client's agent in the issuance of securities (or both). It can also offer services such as aiding mergers and acquisitions, market making, equity securities, launch IPO services, etc. Investment banks deter from normal banking objectives and cater to a different clientele. They offer services to mostly corporations, taking care of their financial needs. Investment banking is divided into two main function groups: buy side and sell side. The sell side deals with trading securities for cash or for other securities and other such functions. The buying side provides the provision of advice to institutions concerned with buying investment services, such as hedge funds, insurance companies, etc.