Difference between Demultiplexer and Decoder

Key Difference: A demultiplexer or DMUX is a combination circuit that contains one data input, few control inputs and many outputs, whereas a decoder is a logic circuit that converts a binary number to its equivalent decimal number.

A decoder is also a kind of combinational circuit that has multiple inputs and multiple outputs, and used for conversion of coded inputs into the coded outputs. The bits in the input code are generally less than the bits that are present in the output code. A decoder basically decodes an input code. For example, if a binary code of n bits is provided to the decoder, then the decoder may tell that which code is this from the possible 2^n codes. A decoder can also be defined as a device that does just the reverse of an encoder. 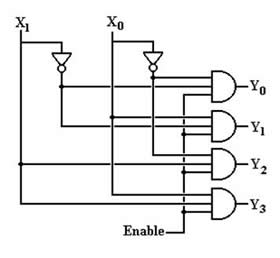 The differences can be summed as:-

are not decoders and encoders in code converter category instead of data transmission?

Demux is a type of Decoder

A demultiplexer can be converted into a decoder by making the input of demux as high(+5v).

the info was very useful

In the definition of demux, what does the n stands for in 2^n?

in demux,if n output there is 2^n selector lines

n stands for no. Of selection line which are shown as C0 and C1 in the diagram of demux .