Difference between Dwarf Planets and Plutoids

Key difference: A dwarf planet is “a celestial body in direct orbit of the Sun that is massive enough for its shape to be controlled by gravitation, but that unlike a planet has not cleared its orbital region of other objects.” A plutoid is a trans-Neptunian dwarf planet. 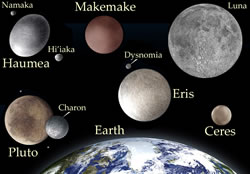 The need for this three-way categorization arose as more and more trans-Neptunian objects were discovered. These trans-Neptunian objects, i.e. objects located further than Neptune, were equal to or even bigger than the size of Pluto. Furthermore, it was discovered that Pluto was actually roughly one-twentieth the mass of Mercury, or one-fifth as massive as Earth's Moon. In addition, it was discovered that Pluto has some unusual characteristics such as large orbital eccentricity and a high orbital inclination. Hence, it was completely different than the other planets. 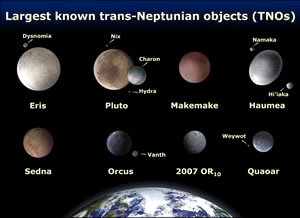 The IAU defines a plutoid as “celestial bodies in orbit around the Sun at a semi-major axis greater than that of Neptune that has sufficient mass for their self-gravity to overcome rigid body forces so that they assume a hydrostatic equilibrium (near-spherical) shape, and that have not cleared the neighborhood around their orbit. Satellites of plutoids are not plutoids themselves.”

Hence, a plutoid is an astronomical body orbiting beyond Neptune that is large enough to be rounded in shape. Essentially, it is a trans-Neptunian dwarf planet. A plutoid is also called an ice dwarf, and effectively refers to any and all objects that meet the requirement to be called a dwarf planet but lie specifically beyond the orbit of Neptune.

Of these five dwarf planets, four of them: Pluto, Haumea, Makemake, and Eris are considered to be plutoids, as they are located in the Kuiper belt, which lies beyond the orbit of Neptune. Ceres, however, is located in the main asteroid belt between the orbits of Mars and Jupiter. Hence, while Ceres is a dwarf planet it is not termed as a plutoid, as it is located in the inner solar system.