Difference between Forest and Jungle

Key Difference:  Forest can be defined as a large area that is covered with trees and underbrush. It is also referred to as wood or woods. Jungle is a dense forest that is nearly impenetrable. A forest is marked by a large covered area with tall trees, whereas a jungle is marked by a concentrated area with dense shrubs, grasses and shorter trees.

Many people consider forest and jungle to be the same. However, jungle is a type or a part of forest. 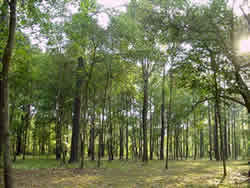 1. A large tract of land covered with trees and underbrush; woodland.

2. The trees on such a tract: to cut down a forest.

3. A tract of wooded grounds in England formerly belonging to the sovereign and set apart for game.

4. A thick cluster of vertical objects

3. A wilderness of dense overgrowth; a piece of swampy, thickset forestland.

The definitions clearly state that a jungle is a type of forest. It just differs in the density. A jungle is a dense and impenetrable forest or a part of a forest.

Trees form the most important and necessary attribute of the forest biome. A forest is characterized by a broad uniformity. The uniformity can be found in the physiographic features as well as in the composition of the dominant specific tree species. The vertical layers of a forest can be divided in various layers like:- 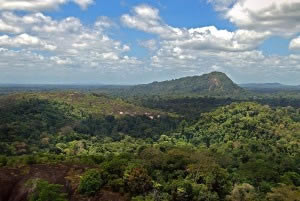 The word jungle originated from the Sanskrit word jangala meaning ‘uncultivated land’, but due to Anglo-Indian interpretation of the word, it is used in context to a highly dense forest. Thus, we can associate the tangled and impenetrable vegetation with a jungle. Due to the intense density, it is a location that is marked by intense competitions and survival struggles. A tropical rain forest can be an example of a jungle.

It is believed that six percent of the Earth is jungle, but still it is home to half of all the species. Therefore, technically it is characterized by extensive biodiversity that includes young trees, vines, plants etc.

A jungle differs from a forest mainly as jungle has shorter trees and a thin canopy in comparison to the forests. Thus, in a forest only one percent of light is able to penetrate to the forest floor. On the other hand, a jungle floor gets enough sunlight that allows the thick growth of shrubs and grasses which makes it impenetrable.