Difference between Practice and Practise

Many people believe that the word ‘practise’ is a misspelling of ‘practice’. They fail to recognize that they are both proper words. They sound the same and even look similar, except that one is spelled with a ‘c’ and the other with an ‘s’. However, the context that they are used in differs. 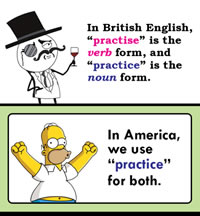 According to the British English, the word ‘practise’ is used as a verb. It is used in the sense of ‘doing something repeatedly to improve one’s skill’. It denotes something done in order to attain perfection. For example, I regularly practise playing the guitar.

The word ‘practice’, however, is used as a noun. It is used in the sense of ‘something done or performed regularly’. It refers to the act itself, not a person doing something. For example, I need to visit the doctor’s practice.

A simple way to remember when to use which word, it’s ‘to practise’ and ‘the practice’. Remember, practice makes perfect, so it’s good to practise.

If you agree that practice makes perfect and that it's good to practise, then that means you practise practice. Sorry. Too much coffee.