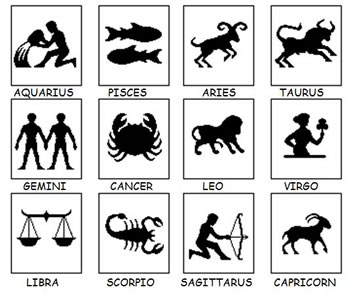 Zodiac is a form of western astrology, where the movement of the sun at the time of a person’s birth brings forth revelations about his/her physical traits, characteristics, state of mind, etc. To understand the zodiac signs conversantly, one has to first know what zodiac is, and the way it functions. In simple terminology, zodiac can be defined as a circular path comprising of twelve 30 degree segments, known as the various signs of the zodiac. This circular path is also known as the ecliptic, the path that the sun takes to revolve around an imaginary sphere around the earth, known as the celestial sphere. The point where the sun begins its 360-degree journey is at zero degrees or the vernal equinox. The vernal equinox also marks the beginning of the first sign of the zodiac, which is the Aries. As the sun moves along the ecliptic, it passes the various signs of the zodiac, occupying each for a while, in order to pass through it completely. A Person born in a time that is the same as the duration of the sun’s occupation of a particular sign will fall under that specific sign of the zodiac. Consequently, his/her traits, habits, behavior, etc. will be determined by this movement of the sun, which is what the zodiac signs are all about. See Horoscope Vs. Astrology.

The zodiac is also called the circle of life, which is why the signs of zodiac carry the names and depictions of living beings such as animals and humans. See: Astronomy Vs. Astrology. The twelve signs of the zodiac are as follows: 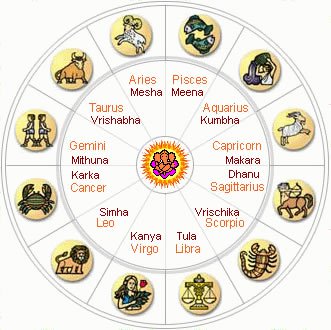 As per the science of Vedic Astrology followed in the Hindu religion, the Rashi of a person means the segment of the moon’s orbital path occupied by it, at the time of a person’s birth. See Horoscope Vs. Kundli. In western astrological concepts such as the zodiac, the sun’s movement is studied to derive the traits and characteristics of a person. Whereas, the Rashi of a person is derived from the movement of the moon during his/her birth. This is because the moon is given preference over the sun as it is closer to the earth, and influences the other Vedic astrology concepts such as the planetary transits and the Dashas. In fact, the naming of babies is carried out as per the observation of Rashis during their birth. Each Rashi defines various syllables by which a baby can be named.

The following table illustrates the syllables that each Rashi stands for:

Fascinatingly, the Rashi and the zodiac have many things in common between them. For instance, Rashi is concerned with the movement of a celestial body at the time of a person’s birth, as is the case in the zodiac. Similar to the ecliptic in the zodiac, the orbital path of the moon is also divided into twelve 30 degree segments, to obtain the twelve different Rashis. In addition, the start of the moon’s journey is marked by the Mesha Rashi (the Aries), which is exactly similar to the sun’s journey in the zodiac. Furthermore, as it happens in the zodiac, the qualities of a person are determined by the moon’s occupation of particular Rashi during his/her birth. However, the Rashis are not named exactly like the signs of the zodiac. See the difference between sun sign, moon sign, and the rising sign.

The twelve Rashis and their names are:

Hence, the zodiac and Rashi are a lot like each other, but not exactly the same.

Comparison between Zodiac signs and Rashi:

Also see: The difference between jyotish and tantrik

My son born on 31/5/17. What is his zodiac sign and his birth star.which is based astrology.tell me

what is right zodiac or rashi

All Hindu astrology follows vedic transition. Hence you should look at RASHI for your reference. When you are surfing online and it is non vedic/Hindu then follow Zodiac. But somehow feel Hindu vedic are better reader of astronomy.

My name is shailesh which is aquarious but my birth Rashi is cancer .Which should I follow to accurate prediction?

the zodiac and Rashi is very confusing factor when studying about one's future.for example person born on 25th august borderline of leo and virgo. so as per english zodiac sign that person called virgo, but as per hindu astrology the person is taurus.when the person reads prediction in english paper what should he/she follow?Taurus or Virgo?