Key Difference: The Asus Padfone Infinity smartphone is a slick 5-inch full HD 1920x1080, Super IPS+ with Capacitive Multi touch panel and provides approximately 441 ppi density. The device is a bar phone, with curved corners giving it a similar look to the ‘iPhone’ and ‘HTC One’. The Asus Padfone Infinity Dock is basically the 10-inch tablet shell that allows users to dock their phone into the tablet by sliding it into a slick slot on the back. One of the first smartphones under the brand is the Nokia Lumia 920. The Nokia Lumia 920 was one of the first phones to be developed running on Windows Phone 8. It was launched in November 2012 as its flagship phone. 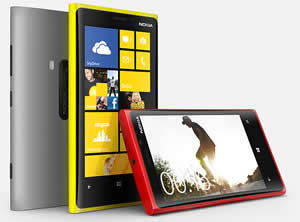 Nokia is a Finland-based multinational communications and information technology corporation. Nokia’s phones have been famously known as being simple and durable. In 2012, it was the world’s second largest mobile phone maker by unit sales, following Samsung. However, the sales of Nokia have been decreasing as more and more of the market shifts towards smartphones such as iPhones and Androids. In an attempt to offset their decreasing sales, Nokia tied up with Microsoft to release its own line of smartphones, the Nokia Lumia running on Windows Phone Operating Software.

The phone is available in a variety of bright colors, such as black, gray, red, yellow, and white. The newest and most distinguishing feature of the Lumia 920 is that the phone is capable of wireless charging. However, the wireless charging mat is not included with the phone and has to be purchased separately.

The device has been criticized as being heavy and bulky. Another issue with the phone, in fact all the Windows phones, is that it comes with the Internet Explorer browser built-in, which can be quite lagging at times, and the phones do not support any other browsers. Furthermore, the collection of apps available on Windows is quite limited, especially as compared to the apps available for Android and Apple.

The information for the detailed table about the two phones has been taken from the Asus website, Nokia website, digitaltrends.com and GSMArena.com.